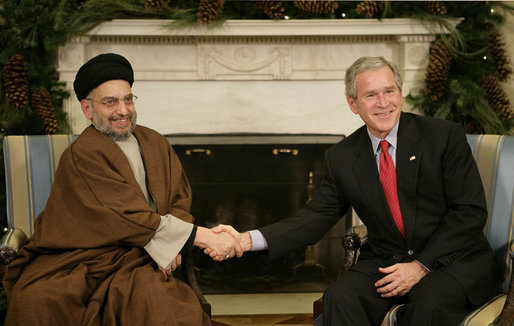 Iraq is being torn apart while George W Bush and Abdul Aziz al-Hakim enable each other. As the Hadley memo points out, Mr. Bush is counting on Mr. Hakim to deliver an Iraq that can "govern itself, sustain itself, and defend itself." Mr. Hakim, for his part, is in the enviable position of being able to use the leader of the free world to pursue his goal of bringing about an Islamic revolution in Iraq. The dialectic between Mr. Bush and Mr. Hakim became abundantly clear today.

Today the US military detained Ammar al-Hakim, the eldest son of Abdul Aziz al-Hakim, as he returned to Iraq from Iran:

U.S. forces detained the son of one of Iraq’s most prominent Shiite politicians for several hours Friday, a spokesman for the Supreme Council for the Islamic Revolution in Iraq said.

The convoy of Amar al-Hakim, one of the sons of party leader Abdul Aziz al-Hakim, was stopped as Amar was returning from a trip to Iran, Haitham al-Husseini said.

The senior Hakim, whose party controls the largest number of seats in the Iraqi parliament and who met with President Bush during a visit to Washington in December, spent many years in exile in Iran and has close ties to that country. U.S. officials have said Iran has supplied weapons to militias targeting American forces in Iraq.

The younger al-Hakim, however, was released, with an apology from the American ambassador, after some high level intervention:

The American ambassador to Iraq, Zalmay Khalilzad, said he was “sorry” for the detention. The son is himself a senior official in Mr. Hakim’s political movement and has often taken a leading role in building support for his father’s political efforts throughout Shiite-dominated southern Iraq. A Hakim aide suggested that the son was being groomed to take control of the family’s political dynasty.

He also said that United States military officers whom he would not identify had contacted aides to Mr. Hakim and apologized for the detention. Mr. Khalilzad, the American ambassador, was quoted by news agencies as saying that he regretted the episode and that “we do not mean any disrespect” to the Hakim family. [Emphasis added by me.]

It appears that the Bush Administration knows who the real masters are in Iraq. An administration that famously does not say "sorry" for launching wars without justification or killing innocents in Iraq was bending over backwards to not show "disrespect" to the Hakim family.

Ammar al-Hakim is not only the son of Mr. Bush’s man in Iraq, he is also a major political force and power broker in Iraq in his own right. The younger al-Hakim is the second in command, after his father, of the Supreme Council for the Islamic Revolution in Iraq (SCIRI) and he is the point man for SCIRI’s push to create a separate Shia state in the south of Iraq.

One of the strongest advocates of a federal state in the south is Abdul-Aziz al-Hakim, head of the Supreme Council of Islamic Revolution in Iraq, SCIRI, one of the major Shia partners in the UIA bloc. He says federalism is a “constitutional right” not only for the Kurds but also for the people of central and southern Iraq.

“Federalism does not mean splitting the country. It is a hope for the future of Iraq, and it is a demand by the masses,” he said recently in Najaf.

Hakim has commissioned his son, Ammar al-Hakim, head of the Shahid al-Mihrab Institute, a SCIRI establishment that promotes Islam in southern Iraq, to mobilise popular support for the federalism project.

In addition to his leading role in advocating for a separate Shia homeland in the Iraqi south, Ammar al-Hakim is very well known in Iraq and has often been the spokesman for SCIRI since the beginning of the Iraq invasion. The major force that stands in opposition to the Hakim family’s plan to create an Iranian proxy state in Iraq is Moqtada al-Sadr. In Mr. Bush’s attempt at isolating Mr. al-Sadr he is handing Iraq over to the Iranian-backed and financed SCIRI and the Iranian-groomed Hakim family.

There can only be two possible answers to Mr. Bush’s puzzling dalliance with SCIRI and the Hakim clan. One possibility is that Mr. Bush is ignorant of the complexities in the Iraqi political landscape and does not understand how his actions contribute to Iraqi instability. The other possibility is that Mr. Bush understands fully that his actions in Iraq are empowering Iran. If the latter is the case, then one is forced to ask why Mr. Bush would want to empower Iran in Iraq. It may be that by empowering Iran in Iraq, the only Iraq exit strategy left on the table for Mr. Bush is to strike Iran in order to counter Iran’s increased influence. Recent saber-rattling by the Bush Administration against Iran does not bode well for the future.

Meanwhile, the president of the United States hosts a death squad leader (Abdul Aziz al-Hakim) in the White House and calls him "Your Eminence" and the American ambassador to Iraq is forced to apologize to the death squad leader’s son in case any disrespect was caused by American soldiers.

This entry was posted in Foreign Policy, Iraq. Bookmark the permalink.