Why Is This Man Smiling?

On December 20, 1983 President Reagan’s special envoy, Donald Rumsfeld, met with Iraqi President Saddam Hussein to foster closer ties between the two nations. On the agenda was how best to counter Iran and how to find alternate routes for Iraqi oil since the Iranians had cut off Iraq’s ability to ship oil through the Persian Gulf. The meeting with Saddam Hussein went swimmingly with the Dictator pleased by the support he was receiving from Washington in his war against Iran. The troubling topic of Saddam Hussein’s recent and continuing use of chemical weapons against Iran did not come up during the 90-minute meeting. 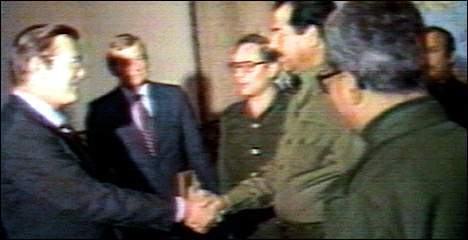 The United States had decided to lend its support to Iraq in its war against Iran. Although Saddam’s use of chemical weapons against Iran and Kurdish insurgents was an unfortunate distraction, it nonetheless was decided that Saddam would be a bulwark against Islamist Iran and must be supported.

The war between Iran and Iraq followed the Islamic Revolution in Iran and the rise to prominence of Islamist opposition in Iraq as a result. The most prominent opposition Islamist opposition party in Iraq was the Iranian funded al Dawa party. The current Prime Minister of Iraq, Ibrahim al-Jaafari, is a long time member of the al Dawa party. As tensions between Iraq and Iran escalated after the Iranian Revolution over the disputed Shatt al-Arab waterway, the attempted assassination of Iraqi foreign minister Tariq Aziz by al Dawa became a major precipitating factor that culminated in the Iraqi attack on Iran.

Iraq retaliated against al Dawa by systematically assassinating its members. Most remaining members of al Dawa fled to Iran. Under Iranian protection, the al Dawa party began to engage in ever-greater acts of terrorism against Iraq and Western interests. These acts included multiple attempts at assassinating Saddam Hussein and other leaders of the Iraqi Government and the car bombing of the Iraqi Embassy in Beirut on December 15, 1981. The Iraqi Embassy bombing in Beirut was the beginning of the modern era of suicide car bombing. The al Dawa party is also responsible for the bombing of the U.S. Embassy and French Embassies in Kuwait on December 12, 1983 in which six people were killed.

While based in Tehran the al Dawa party formed a terrorist wing called the Islamic Jihad. Islamic Jihad and al Dawa were responsible for acts of terrorism against Americans in Kuwait and Lebanon. Islamic Jihad was the germ of what would later become the Iranian backed Lebanese militant group Hezbollah. The 1983 car bombing of the U.S. Marine barracks in Beirut that killed 241 marines while they slept was carried out by these precursor groups to Hezbollah. That attack on the Marine barracks has been tied directly to Iran through its surrogates such as al Dawa.

Our brief jaunt through the history of the al Dawa party and our support for Saddam Hussein at the time raises the question, "Why is Donald Rumsfeld Smiling?" Who are our real enemies? Is the world really divided into "us" and "them"? And does membership in the "us" and "them" clubs shift over time due to political expediency?

The United States has a long history of supporting some very bad actors without regard for human rights, terrorism, murders, use of weapons of mass destruction, democracy, human rights or any of the other high ideals that the Bush Administration preaches and the evil acts the Bush Administration so righteously abhors. History shows that we have chosen to throw our lot in with any actor in a conflict without regard for any ideals simply because it supported some grand notion of realpolitik.

We have through our practice of nurturing hateful regimes and groups reaped the rewards that invariably come with such support. All our protégés have come back to harm us. These include, in no particular order, Saddam Hussein and al Qaeda. As history has taught us nothing we have now elevated the al Dawa party and Ibrahim al-Jaafari to power in Iraq. Of all people Donald Rumsfeld should know the history of al Dawa well.

Now we are making noises to try to replace al-Jaafari as Prime Minister in Iraq. The likely replacements for al-Jaafari now are another al Dawa member or a member of the SCIRI (The Supreme Council for Islamic Resistance in Iraq). None of those prospects offer any hope of a better regime in Iraq.

The Bush Administration rhetoric rings hollow. It has never been about "evildoers". Who we consider evildoers changes with the political winds. This kind of pragmatic foreign policy might be appealing if not for the fact that in almost every instance the United States has been repaid by our protégés of the day with death and destruction and in most cases with American blood.

We should keep this in mind as we embark on another misadventure in Iran with the support of your newest terrorist allies: Mujahedeen-e Khalq (MEK).

So I ask again, "Why is this man smiling?"

This entry was posted in Foreign Policy, Iran, Iraq. Bookmark the permalink.

18 Responses to Why Is This Man Smiling?