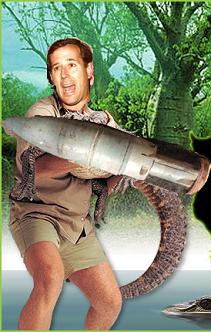 Senator Rick Santorum, together with Congressman Peter Hoekstra, announced today that newly declassified evidence proves the existence of Weapons of Mass Destruction in Iraq after the 2003 Iraq invasion. Senator Santorum went on the Senate floor and touted this "new" information. Finally here was proof that George W Bush’s little adventure in Iraq was not totally pointless.

Senator Santorum’s press release on the subject states in part:

“The information released today proves that weapons of mass destruction are, in fact, in Iraq,” said Senator Santorum. “It is essential for the American people to understand that these weapons are in Iraq. I will continue to advocate for the complete declassification of this report so we can more fully understand the complete WMD picture inside Iraq.”

The following are the six key points contained in the unclassified overview:

• Pre-Gulf War Iraqi chemical weapons could be sold on the black market. Use of these weapons by terrorists or insurgent groups would have implications for Coalition forces in Iraq. The possibility of use outside Iraq cannot be ruled out.

• The most likely munitions remaining are sarin and mustard-filled projectiles.

• The purity of the agent inside the munitions depends on many factors, including the manufacturing process, potential additives, and environmental storage conditions. While agents degrade over time, chemical warfare agents remain hazardous and potentially lethal.

• It has been reported in open press that insurgents and Iraqi groups desire to acquire and use chemical weapons.

Either Senator Santorum is an idiot or he thinks the American public are idiots – or both. After his stunning revelations it made some sense to go back and review three crucial reports on the subject of Iraq’s WMD. These are:

Senator Santorum claims that the discovery of pre-1991 chemical weapons munitions proves Iraq had WMD. Here is what Volume III of the Duelfer Report, entitled Iraq’s Chemical Warfare Program, had to say about these munitions in its key findings:

While a small number of old, abandoned chemical munitions have been discovered, ISG judges that Iraq unilaterally destroyed its undeclared chemical weapons stockpile in 1991. There are no credible indications that Baghdad resumed production of chemical munitions thereafter, a policy ISG attributes to Baghdad’s desire to see sanctions lifted, or rendered ineffectual, or its fear of force against it should WMD be discovered.

The Duelfer Report goes on to state:

ISG expended considerable time and effort investigating longstanding Iraqi assertions about the fate of CW munitions known to have been in Baghdad’s possession during the Gulf war. We believe the vast majority of these munitions were destroyed, but questions remain concerning hundreds of CW munitions.

Since May 2004, ISG has recovered dozens of additional chemical munitions, including artillery rounds, rockets and a binary Sarin artillery projectile (see Figure 5). In each case, the recovered munitions appear to have been part of the pre-1991 Gulf war stocks, but we can neither determine if the munitions were declared to the UN or if, as required by the UN SCR 687, Iraq attempted to destroy them. (See Annex F.)

Iraq completed the destruction of its pre-1991 stockpile of CW by the end of 1991, with most items destroyed in July of that year. ISG judges that Iraq destroyed almost all prohibited weapons at that time.

These remaining pre-1991 weapons either escaped destruction in 1991 or suffered only partial damage. More may be found in the months and years ahead. [Emphasis added by me.]

The March 2005 Addendum to the Duelfer Report lays the findings out even more clearly:

ISG assesses that Iraq and Coalition Forces will continue to discover small numbers of degraded chemical weapons, which the former Regime mislaid or improperly destroyed prior to 1991. ISG believes the bulk of these weapons were likely abandoned, forgotten and lost during the Iran-Iraq war because tens of thousands of CW munitions were forward deployed along frequently and rapidly shifting battlefronts.

However, ISG believes that any remaining chemical munitions in Iraq do not pose a militarily significant threat to Coalition Forces because the agent and munitions are degraded and there are not enough extant weapons to cause mass casualties.

Finally, the Silberman-Robb Commission concluded that Iraq had no chemical weapons capability and what remained were discarded pre-1991 munitions:

The Iraq Survey Group’s findings undermined both the Intelligence Community’s assessments about Iraq’s pre-war CW program and, indeed, the very fundamental assumptions upon which those assessments were based. The ISG concluded–contrary to the Intelligence Community’s pre-war assessments–that Iraq had actually unilaterally destroyed its undeclared CW stockpile in 1991 and that there were no credible indications that Baghdad resumed production of CW thereafter. Iraq had not regained its pre-1991 CW technical sophistication or production capabilities prior to the war. Further, pre-war concerns of Iraqi plans to use CW if Coalition forces crossed certain defensive "red lines" were groundless; the "red lines" referred to conventional military planning only. Finally, the only CW the Iraq Survey Group recovered were weapons manufactured before the first Gulf War; the ISG concluded that, after 1991, Iraq maintained only small, covert labs to research chemicals and poisons, primarily for intelligence operations.

Overall, although the vast majority of CW munitions had been destroyed, the Iraq Survey Group recognized that questions remained relating to the disposition of hundreds of pre-1991 CW munitions. Still, given that, of the dozens of CW munitions that the ISG discovered, all had been manufactured before 1991, the Intelligence Community’s 2002 assessments that Iraq had restarted its CW program turned out to have been seriously off the mark.

Senator Santorum, it seems, failed to read either the ISG reports or the Silberman-Robb Commission reports. If he had, he would have realized that the "chemical weapons" he is touting are old, ineffective munitions manufactured before 1991 that had been discarded or partially destroyed. Furthermore, these munitions pose no proliferation threat. It should however surprise no one that the Senator would leap to such conclusions. This is exactly the mentality that got us into the Iraq war in the first place. Senator Santorum and the Bush Administration claimed that Iraq had WMD and used any scrap of intelligence to try to justify the case for war. It appears that Senator Santorum has not yet learned the lessons of the Iraq war – that fixing the intelligence around the policy is a dangerous path to follow.

We as a country are being ill served by such ignorant behavior from our Senators and our Congressmen. The only question really is whether Senator Santorum is willfully misleading the public or whether he really is this stupid.

This entry was posted in Iraq, Politics. Bookmark the permalink.