Muhammad Yunus And The Power Of An Idea 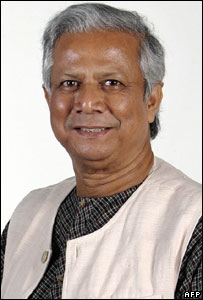 Today Muhammad Yunus and the Grameen Bank were awarded the 2006 Nobel Peace Prize "for their efforts to create economic and social development from below." Today is a day of celebration for all of Bangladesh and Bengalis everywhere. In a country racked by political infighting, corruption and poverty, Dr. Yunus and his faith in the poorest souls on Earth has always been a slight ray of hope. Today that ray shines a little brighter.

Dr. Yunus was awarded the Nobel Peace Prize for his pioneering work in the use of microcredit. Dr. Yunus is an economist who founded Grameen Bank in 1976 (formally in 1983) to give small loans to mostly poor women in rural Bangladesh to start small businesses. These women, who were otherwise deemed "unbankable" by conventional banks, proved to be a lower credit risk than most "creditworthy" borrowers. Grameen Bank’s loan repayment rate is over 98% – significantly higher than most commercial banks in the Third World. Dr. Yunus discovered that microcredit can be both commercially viable and an engine for socio-economic change. Grameen Bank has helped millions of Bangladeshis rise above poverty, not through charity, but through hard work and a little faith in their abilities.

Dr. Yunus’s success in helping the poor help themselves has been duplicated in almost all other developing countries. He has proven the value of direct investment from the bottom up in bringing about economic development. Microcredit and its success stands in direct contrast to the billions of dollars in foreign aid that is wasted when the West gives "aid" to Third World tyrants and dictators.

Muhammad Yunus has shown himself to be a leader who has managed to translate visions into practical action for the benefit of millions of people, not only in Bangladesh, but also in many other countries.

Loans to poor people without any financial security had appeared to be an impossible idea. From modest beginnings three decades ago, Yunus has, first and foremost through Grameen Bank, developed micro-credit into an ever more important instrument in the struggle against poverty.

Every single individual on earth has both the potential and the right to live a decent life. Across cultures and civilizations, Yunus and Grameen Bank have shown that even the poorest of the poor can work to bring about their own development.

Micro-credit has proved to be an important liberating force in societies where women in particular have to struggle against repressive social and economic conditions. Economic growth and political democracy cannot achieve their full potential unless the female half of humanity participates on an equal footing with the male.

Dr. Yunus had a simple idea that he turned into action. In doing so, he has changed millions of lives.

Everyday hundreds of millions of people on our planet struggle to just survive. They struggle not with questions of war and peace, not with decisions to launch bombs or practice diplomacy; but with how to find enough food to feed themselves and their families. Their needs are basic and consume most of their existence. These people, our fellow human beings, our fellow brothers and sisters, live on the neglected edge of society. Dr. Yunus, three decades ago, resolved to do his part to help his fellow brothers and sisters step away from the edge. In doing so, Dr. Yunus understood what the current occupant of the White House to this day does not: that peace and stability in this world cannot be achieved until and unless the roots of poverty are addressed.

For his efforts to alleviate poverty to bring about a more peaceful world, the Nobel Committee today awarded Dr. Muhammad Yunus the Nobel Peace Prize.

This entry was posted in Bangladesh, Human Rights, Society. Bookmark the permalink.

19 Responses to Muhammad Yunus And The Power Of An Idea