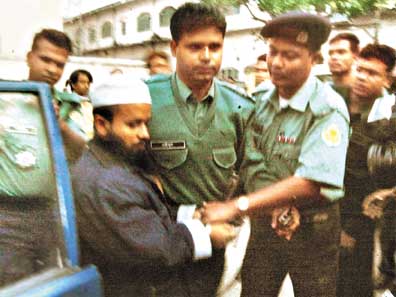 Mubarak Hussain is almost home. Last spring, when the U.S. government released the names of the detainees being held at Guantanamo Bay, it became apparent that at least some of the detainees were not what Mr. Bush and Mr. Cheney claimed they were. At the time, I questioned whether the information they had on the Bangladeshi detainees was accurate. It seemed to me that if the U.S. government did not even bother to check that they had the correct information on Mubarak Hussain, one of the Bangladeshi detainees, that their claims that this man was a "terrorist" who was so dangerous that he had to be locked away without charge probably amounted to a load of bullshit.

It turns out that after five years of holding Mubarak Hussain without charge, the U.S. government flew him back to Bangladesh without even a hint of an apology:

U.S. authorities repatriated a Bangladeshi man on Sunday after years of imprisonment in Guantanamo Bay, Cuba, a police official said.

"We are interrogating him," Tahera Banu, an official of the airport police station in Bangladesh’s capital Dhaka, told The Associated Press by telephone.

Police did not immediately allow reporters or the man’s relatives to talk to him.

According to the Pentagon, Mubarak, born on January 1, 1978, is from "Baria" Bangladesh, which is actually Brahmanbaria. The area is 80 kilometers (50 miles) east of the capital, Dhaka.

Today Mubarak Hussain is in police custody in Dhaka. The police in Bangladesh will no doubt torture the man a little to give Mr. Bush his money’s worth. He is being held on a three day remand for "questioning":

Mobarak went to Pakistan for studies in 1998 and taught in a madrasa in Karachi after completion of two-year study.

In 2001, Pakistan intelligence arrested him and suspecting his link with al-Qaeda, handed over to the US authorities who later took him to the Guantanamo Bay prison.

Mobarak need to be quizzed to learn his ‘true’ objective for going to Pakistan, if he was a member of any banned organisation in the country and if he had any criminal records, said Sub-Inspector Masud of Airport police in the remand prayer.

Police also revealed that Mobarak went to Kabul in Afghanistan to visit his friend Rafiq, whom he met while teaching at a Karachi madrasa.

Then he went to Jalalabad in Afghanistan from where Pakistan intelligence arrested him and kept detained for 32 weeks.

The Pakistan authorities later handed him over to the US authorities, who interrogated him at different camps in Pakistan and lastly sent to the Guantanamo Bay prison, Masud said in the police report placed before the court.

Mobarak’s father Abul Hashem reiterated his claim that his son is innocent. "If they [US authorities] had found the slightest clue about his militancy link, they would not have released him," he told The Daily Star. [Emphasis added by me.]

This is your "War on Terror". While Osama bin Laden is still on the loose, we are rounding up hapless people around the globe so Mr. Bush can look like he is "winning" the war. If anyone is still in doubt about the quality of justice at Guantanamo Bay, feel free to peruse the Combatant Status Review Tribunal transcripts. The tribunals make Kangaroo Courts look good.

Mubarak Hussain’s ordeal at Guantanamo Bay has finally come to an end. I am sure Mr. Hussain has learned a lot about Mr. Bush’s freedom agenda in his five wasted years. Mr. Bush is spreading democracy all over the globe one destroyed life at a time.

This entry was posted in Bangladesh, Foreign Policy, Human Rights. Bookmark the permalink.