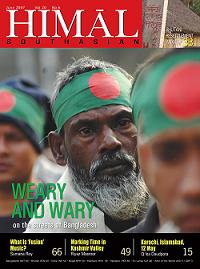 Bangladesh is the cover feature of the June 2007 issue of Himal Southasian magazine, published from Nepal. There are three feature articles and seven short articles on the current situation in Bangladesh. One of the short articles was written by me.

Two articles on Bangladesh in the May issue of Himal Southasian magazine were banned in Bangladesh because they were critical of the military government. It remains to be seen if the current issue will be allowed to be distributed in Bangladesh.

The three feature articles are:

The seven short articles, including mine, are under the heading "Under the emergency: seven takes". I wrote my article as a member of the Drishtipat Writers’ Collective, a diverse group of writers of Bangladeshi origin who are concerned about the future of democracy in Bangladesh.

My article is reprinted below:

When Iajuddin Ahmed declared a state of emergency on 11 January after two months of political turmoil, he assured Bangladeshis that a newly constituted caretaker government would “hold a free, fair, neutral and acceptable election to Parliament within the shortest possible time, in consultation with all parties concerned”. In spite of the state of emergency, Bangladesh breathed a collective sigh of relief.

That relief has now dissipated, and in its place is mounting concern. The caretaker government’s mandate to hold ‘free and fair’ elections has now mutated into an all-encompassing anti-corruption drive. The business of holding elections has taken a back seat to the business of rounding up politicians on corruption charges. A ban on political activities, the suppression of fundamental rights, and intimidation of the press have contributed to creating a state of dire uncertainty.

While the reduction of corruption, rampant in Bangladesh, is a laudable and important goal, it is far from clear that an anti-corruption drive by an unaccountable government can indeed be successful. On the contrary, all the conditions exist today for the further corruption of the political system in Bangladesh. The World Bank often uses the following formula for parsing corruption: C = M + D – A, where corruption (C) equals monopoly power (M) combined with discretion by public officials (D) minus accountability (A). According to this formula, the current caretaker government’s monopoly over all instruments of state power; its powers of arbitrary arrest without warrant, and its detention of citizens without due-process rights; and the limitations it has placed on the press as the citizens’ watchdog, all conspire to undermine the government’s stated goal of reducing corruption.

The crucial element of fighting corruption – accountability – is conspicuously missing from the current framework. Though the leaders of the caretaker government may have good intentions, the government itself, operating under a state of emergency, is institutionally stacked against them.

It is time for Iajuddin Ahmed’s caretaker government to return to its original and constitutionally supportable mandate of holding free and fair elections. To do that, a dialogue must start with the country’s political parties, to begin work on electoral reform; shackles on the press must be undone so that free flow of information, so essential to accountability, is guaranteed; and those who have committed crimes, including stealing from the public coffers, need to be brought before the courts with full due process. But time is not on the caretaker government’s side. It has a job to do – and needs to do it expeditiously.

This entry was posted in Bangladesh, General, Published Articles. Bookmark the permalink.