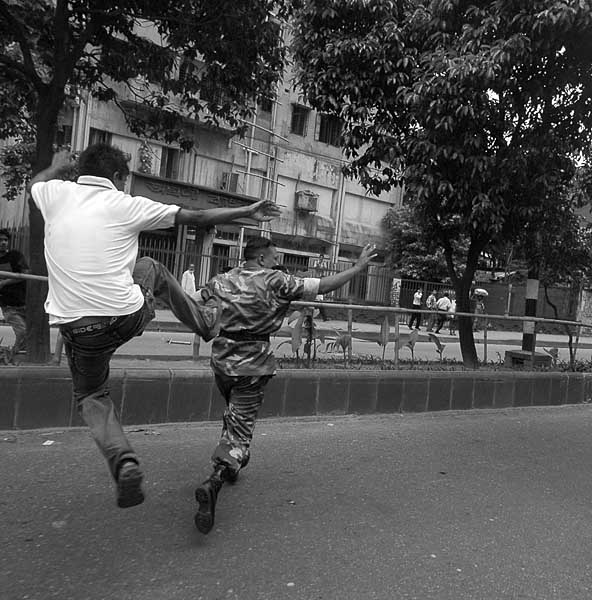 "In unprecedented scenes, soldiers in uniform were seen being chased out of the Dhaka university campus by students. In two days, the myth of the army’s omnipotence was all but laid to rest. " – BBC News

[Via Rezwan] Shahidul Alam, critically acclaimed Bangladeshi photo-journalist, has posted some powerful images of the protests and the curfew in Bangladesh and has penned a blogging tour de force:

Rahnuma and I talked of the events over the last two days, of the army camp in Dhaka University. Of a soldier slapping a student. Of the vice chancellor (acting) being beaten up by police. This had never happened before, not even during the Ayub or Ershad military regimes.

Despite their claims, this government had never been called in by the people. We had no say in who the advisers would be. It was not military rule the people had welcomed, but the cessation of violence and the fear of further anarchy if the rigged elections were held. Banana trees would have made equally good replacements. However, banana trees would not have sold national interests. Closed down environmentally-friendly jute mills. Made slum dwellers homeless, or tortured and killed adibashis protesting the military acquisition of their ancestral lands. So while there was initial relief, as the price of essentials soared, news of nepotism and the partisan manner in which Jamaat -e-Islami was being shielded soon made people realise this banana tree would never bear fruit, let alone run a government.

Multiple demands of students and teachers have been whittled down to one – withdraw emergency rule. Underground pamphlets are spreading like wildfire. With the Internet down, text messages are filling up the ether. The information adviser’s suave statements to the media faltered as he snapped, “why such a fuss about a slap or two?”

The US has declared support for the chief adviser’s statement. What he lacks is the support of the people.

The military government’s response to the protests will be brutal and swift. Already many students have been detained and beaten. Five prominent university professors have been taken away in the middle of the night. The newspaper run by the Information and Law Advisor urges some Orwellian measures today. However, the ground has shifted in Bangladesh. The picture above will become iconic – the military will not rule Bangladesh. That realization, if it comes, by the military government can and should begin its smooth exit and give way to early elections.

8 Responses to The Kick