Squatters, Goons And The Media In Bangladesh 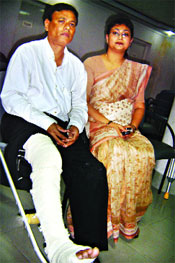 So let me tell you a story.

Twenty-two days after the lease has expired, on October 22 2007, your tenants are seen installing a diesel generator on the roof of the building you own, without your permission. When you and your wife arrive to prevent the tenants from making modifications to the building you own, you are punched by the tenant and, on his orders, his goons set upon you with metal rods. You end up in the hospital. Your wife tries to intervene and is slapped by the tenant.

Three days after the incident, you hold a press conference trying to get some justice. Reporters attend your press conference but only one newspaper in the country decides to publish your story.

The story above represents the allegations made at a press conference in Dhaka on October 25, 2007 by Dr. Mahbub Islam and his wife, the landlords. The tenants are three companies – Adcom, Signage and Magnavision. Adcom is owned by Geeteara Safiya Choudhury, a current civilian Advisor of the military government of Bangladesh. The other two companies are owned by her husband, Nazim Kamran Choudhury, a former member of the Bangladeshi parliament. Dr. Islam and his wife allege that Nazim Kamran Choudhury and others assaulted them on October 22, 2007 at their own building, twenty-two days after the lease expired and after the three companies failed to vacate the premises.

Mrs. Geeteara Choudhury, who famously said back in April of this year that "I’m not thinking about human rights at this time, but my own", is one of the civilian faces of this military government – a government that claims as its mandate an "anti-corruption" drive. This government claims that it is doing away with abuse of power and corruption as it jails top politicians and hundreds of thousands of citizens under draconian laws. Yet, Geeteara Choudhury and her husband now face accusations of using their power to forcibly squat on someone else’s property. Mr. Choudhury also faces accusations of violent assault. This is a story of the powerful forcing their will on the powerless. This is a story of corruption and abuse of power.

Every day the Bangladeshi newspapers are filled with stories of corruption by the politicians that are being locked away by this military government. Every allegation is given prominent billing. Yet, the Bangladeshi media remains oddly silent about this story and these allegations.

Now that I have told you the above story, do you think Bangladesh is headed toward more corruption or less corruption? Do you think under these circumstances the common citizen has recourse to the law vis-à-vis the unelected unaccountable "leaders"?

59 Responses to Squatters, Goons And The Media In Bangladesh