Dictators Are People Too 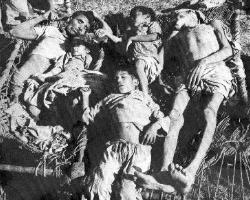 Via the 3rd world view comes the touching tale of a dictator and genocide lost. The strongman of Pakistan, General Pervez Musharraf, has a softer side. Though known for his tough exterior he has a decidedly chewy interior. 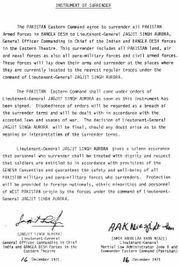 On December 16, 1971 the Pakistan Army unconditionally surrendered to the Indian Army at the Dhaka Race Course in Bangladesh. [Personal Note: The author was perched atop his father’s shoulders as Pakistani General Niazi signed the instrument of surrender.] That surrender brought to an end one of the most concentrated acts of genocide in the Twentieth Century. Over three million Bengali men, women and children were massacred by the Pakistanis in an organized and state sponsored act of genocide. The Pakistani strongman of the time expressed his wishes rather clearly:

"Kill three million of them," said President Yahya Khan at the February conference, "and the rest will eat out of our hands."

General Musharraf was apparently unmoved by the genocide, the rapes, the killings. However, when he heard the news of the Pakistani surrender he was shaken:

He seized power in a coup, has shrugged off three assassination attempts and rules with an iron fist. But for all the steel in him, Pervez Musharraf “literally wept” when he heard Pakistani troops had surrendered during the 1971 Bangladesh war with India.

Musharraf, who described the 1965 and 1971 wars with India as “important” events in his life, said he was “emotionally hurt” when he heard the “disgusting” news of the surrender.

Isn’t it reassuring to know that our ally in the global war on terror cares more about the perpetrators of genocide than the victims? I for one am touched by his emotion. Apparently though the rapes and murders of innocent civilians do not tug at the heart strings of this arrogant fool.

One Response to Dictators Are People Too