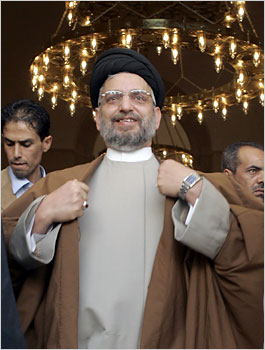 On Monday President Bush is scheduled to meet Abdul Aziz al-Hakim, the leader of the Supreme Council for the Islamic Revolution in Iraq (SCIRI). Mr. Hakim is to get the full treatment topped off with a White House meeting with Mr. Bush. On the heels of Mr. Bush’s ill-conceived summit meeting with beleaguered Iraqi Prime Minister Maliki comes another ill-conceived meeting with the head of the Badr Brigade militia in Iraq. Either Mr. Bush is involved in a bit of Machiavellian mischief in Iraq or he is utterly ignorant.

Mr. Hakim’s SCIRI was formed by Iran in 1982 as a Shia insurgency group during the Iran-Iraq war. SCIRI was formed with the Hakim family at its center. While most Iraqi Shia fought against Iran in the Iran-Iraq war, SCIRI was the only group of Shia that supported Iran. SCIRI has since been funded by Iran while its military wing, the Badr Brigade, has been armed and trained by Tehran. Since the American invasion of Iraq, the Badr Brigade has taken over the Iraqi Ministry of Interior. One of the leaders of the Badr Brigade, Bayan Jabr, was until recently the Minister of Interior, in charge of the police forces. His police, that is the Badr Brigade, are largely responsible for the many tortured corpses that turn up on the streets of Baghdad:

In May 2005, Shiite militia groups in Iraq began depositing corpses into the streets and garbage dumps of Baghdad. The victims, overwhelmingly Sunni, were typically found blindfolded and handcuffed, their corpses showing signs of torture—broken skulls, burn marks, gouged-out eyeballs, electric drill holes; by that October, the death toll attributed to such groups had grown to more than 500. In November, American troops discovered more than 160 beaten, whipped, and starved prisoners—again, mostly Sunni—at a secret detention center run by the country’s Interior Ministry. Since then, Shiite militias have become so integrated into the Iraqi government’s security apparatus and their work so organized, systematic, and targeted that they are commonly referred to in Iraq (and in the American media) by their proper name: death squads. The death squads, which have expanded their area of operations from the capital across much of the country, are now believed to be responsible for more civilian deaths than the Sunni and foreign insurgents who are the United States’ ostensible enemies there. By any reasonable measure, Iraq is in a state of civil war, and some of its most ruthless and lawless combatants are members of the government’s own security units.

The rise of the death squads corresponds almost precisely to the April 2005 appointment of Bayan Jabr as interior minister in Iraq’s transitional government. The Interior Ministry, which is something like a combined FBI and Department of Homeland Security, controls billions of dollars and more than 100,000 men in police and paramilitary units. Jabr was a former high-ranking member of the Iranian-backed Badr Brigade, the military arm of the fundamentalist Shiite Supreme Council for the Islamic Revolution in Iraq (SCIRI) that is now the dominant political force in the country. After taking over the Interior Ministry, he quickly purged it of Sunnis, and members of the Badr Brigade were widely incorporated into the ministry’s police and paramilitary units.

Jabr—who in May of this year was named finance minister in a new government headed by Nuri al-Maliki—has disavowed any personal or institutional responsibility for violence committed by the death squads. He has now acknowledged that some groups operated within the Interior Ministry while he headed it, but he insists that they were few in number; he blames much of the sectarian killing on terrorists “using the clothes of the police or the military.” At a press conference last November that followed the discovery of the torture chamber in an Interior Ministry building, Jabr said, “You can be proud of our forces. [They] respect human rights.” (For this article, Jabr did not respond to requests for comment sent to his press office in Iraq.)

Mr. Jabr is just a small taste of the violent nature of the secretive Badr Brigade. While Moqtada al-Sadr’s rag-tag Mahdi Army gets all the press, the well-trained and battle hardened Badr Brigade continue their killing machine with ruthless efficiency.

While SCIRI and the Sadrists are both involved in sectarian violence against Iraqi Sunnis, there are significant and important differences between the two forces. While SCIRI is a pro-Iranian Shia party, the Sadrists are Shia nationalists. The goal of SCIRI, as its name pretty much gives away (Note to Mr. Bush: READ), is to form an Islamic republic in Iraq, and failing that, to form an Islamic state in the south of Iraq. Moqtada al-Sadr’s group, on the other hand, opposes any partition of Iraq. The politics of SCIRI and the Sadrists flow from their respective religious ideologies. SCIRI follows the Qom School of Shia thought, while the Sadrists follow the Najaf School (or quietist approach) of Shia thought. Briefly, the Qom School, that is the Iranian approach, believes that the state should be run by the ulema, the Muslim clerics. The Najaf School, followed by most Iraqi Shia, believes in "quietism", which believes that the ulema should not directly govern but have influence on the government. These two schools of thought are incompatible, and therein lies the conflict between the Iranian-backed SCIRI and the nationalist Shia movement of Sadr. If Iraq is to come through the meat grinder, it is the nationalist Sadrists and the nationalist Sunnis who will have to reconcile; the SCIRI will be left to the mercy of their Iranian backers.

Mr. Bush’s desperate grasp at "diplomacy" is once again ill-conceived. If the goal is to reach out to Iran to resolve the crisis in Iraq, giving legitimacy to its proxy in Iraq is not the best approach. Mr. Bush first must decide what the goal of American foreign policy in the region should be. I don’t believe it should be the expansion of Iranian hegemony into Iraq. Throwing American support behind SCIRI, and no doubt a high profile visit by Hakim to the White House signals American support of SCIRI, is a dangerous course of action. Iran certainly has a legitimate interest in a stable Iraq and the removal of American forces. That should be a starting point of dialogue with Tehran. The starting point should not be support for the Iranian clergy’s puppets in Baghdad. That kind of approach makes an already weak George W Bush look weaker.

In his knee-jerk attempt to isolate Moqtada al-Sadr, Mr. Bush apparently is throwing his weight behind the next Shia he sees. But, that has always been the problem with George W Bush. His bubble is very small and populated with only a few actors. It is this kind of narrow and myopic vision that has led him domestically to cronyism, such as his ill-fated nominations of Harriet Miers and Bernard Kerik, and internationally to charlatans and death squad leaders, such as his backing of Ahmad Chalabi and now Abdul Aziz al-Hakim.

We should demand some curiosity from the leader of the free world. Tomorrow, when the President of the United States shakes hands with a death squad leader and an Iranian puppet, we should all ponder how far the Decider has fallen from his grand visions of democracy in Iraq.

This entry was posted in Foreign Policy, Iraq, Terrorism, Torture. Bookmark the permalink.