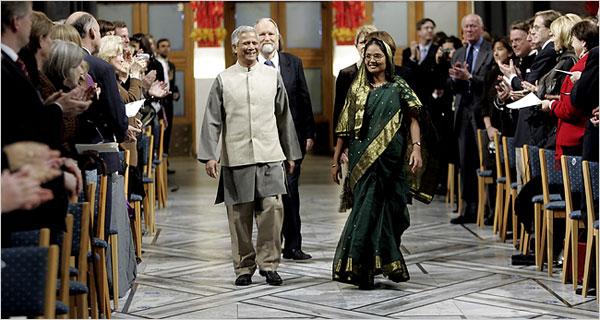 Today Mohammad Yunus accepted the 2006 Nobel Peace Prize at a ceremony in Oslo, Norway. He shares the Nobel Prize jointly with Grameen Bank, the microcredit bank he founded. While Bangladesh teeters on the brink, the ceremony at Oslo City Hall offered hope at a time of disturbing developments in the country.

By giving us this prize, the Norwegian Nobel Committee has given important support to the proposition that peace is inextricably linked to poverty. Poverty is a threat to peace.

The new millennium began with a great global dream. World leaders gathered at the United Nations in 2000 and adopted, among others, a historic goal to reduce poverty by half by 2015. Never in human history had such a bold goal been adopted by the entire world in one voice, one that specified time and size. But then came September 11 and the Iraq war, and suddenly the world became derailed from the pursuit of this dream, with the attention of world leaders shifting from the war on poverty to the war on terrorism. Till now over $ 530 billion has been spent on the war in Iraq by the USA alone.

I believe terrorism cannot be won over by military action. Terrorism must be condemned in the strongest language. We must stand solidly against it, and find all the means to end it. We must address the root causes of terrorism to end it for all time to come. I believe that putting resources into improving the lives of the poor people is a better strategy than spending it on guns.

I believe that we can create a poverty-free world because poverty is not created by poor people. It has been created and sustained by the economic and social system that we have designed for ourselves; the institutions and concepts that make up that system; the policies that we pursue.

Poverty is created because we built our theoretical framework on assumptions which under-estimates human capacity, by designing concepts, which are too narrow (such as concept of business, credit- worthiness, entrepreneurship, employment) or developing institutions, which remain half-done (such as financial institutions, where poor are left out). Poverty is caused by the failure at the conceptual level, rather than any lack of capability on the part of people.

I firmly believe that we can create a poverty-free world if we collectively believe in it. In a poverty-free world, the only place you would be able to see poverty is in the poverty museums. When school children take a tour of the poverty museums, they would be horrified to see the misery and indignity that some human beings had to go through. They would blame their forefathers for tolerating this inhuman condition, which existed for so long, for so many people.

A human being is born into this world fully equipped not only to take care of him or herself, but also to contribute to enlarging the well being of the world as a whole. Some get the chance to explore their potential to some degree, but many others never get any opportunity, during their lifetime, to unwrap the wonderful gift they were born with. They die unexplored and the world remains deprived of their creativity, and their contribution.

Grameen has given me an unshakeable faith in the creativity of human beings. This has led me to believe that human beings are not born to suffer the misery of hunger and poverty.

To me poor people are like bonsai trees. When you plant the best seed of the tallest tree in a flower-pot, you get a replica of the tallest tree, only inches tall. There is nothing wrong with the seed you planted, only the soil-base that is too inadequate. Poor people are bonsai people. There is nothing wrong in their seeds. Simply, society never gave them the base to grow on. All it needs to get the poor people out of poverty for us to create an enabling environment for them. Once the poor can unleash their energy and creativity, poverty will disappear very quickly.

Let us join hands to give every human being a fair chance to unleash their energy and creativity.