Fear And Retribution In Bangladesh 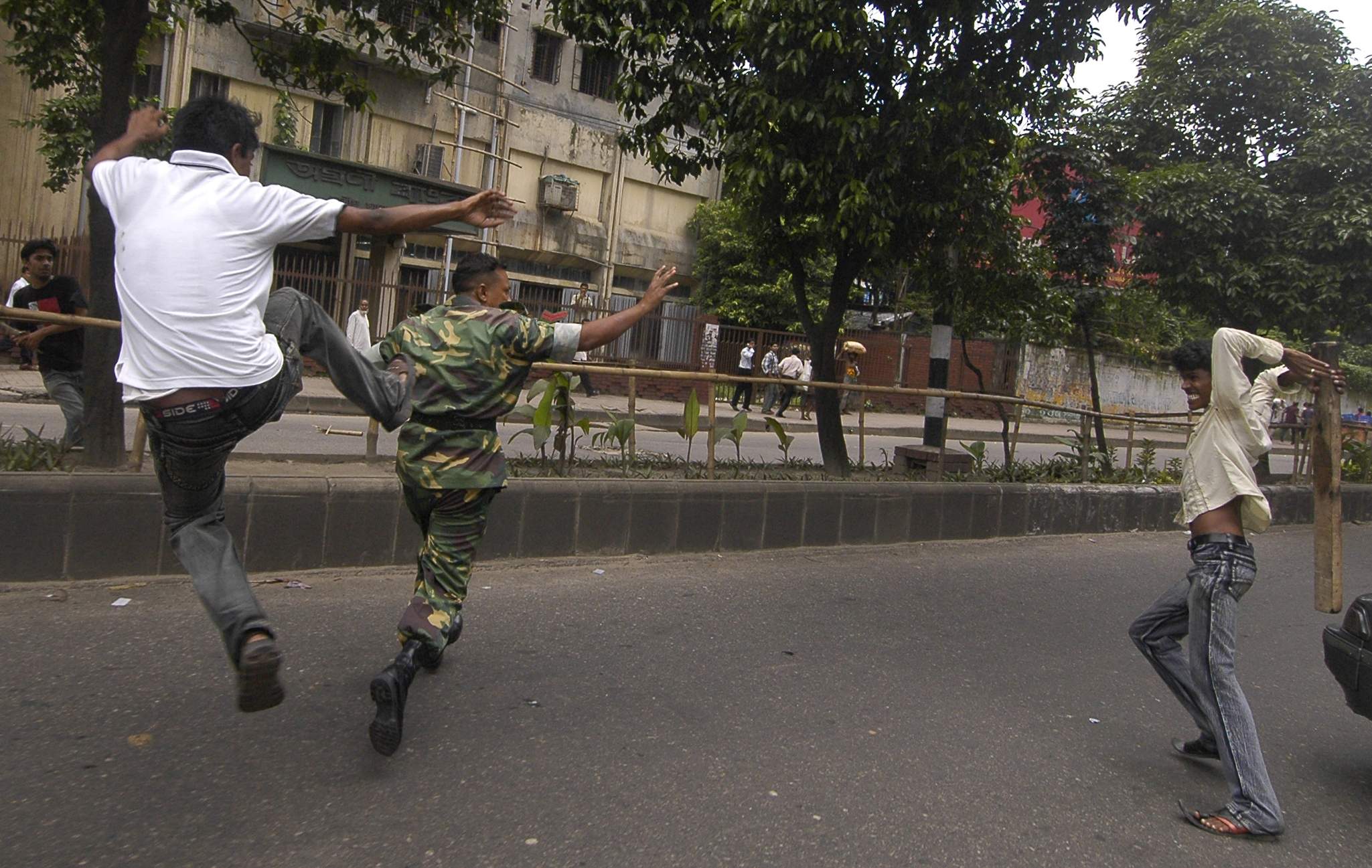 During last week’s mass protests in Bangladesh a demonstrator, possibly a student, lunged toward a Bangladesh army man with his feet raised in anger. The army man was running in fear to escape the fury all around him. A photographer from the Daily Star newspaper captured the moment in a dramatic photograph that has stripped bare the iron fist of the Bangladesh military. The man flying through the air is Bangladesh’s "Tank Man". Just like "Tank Man" today his whereabouts are unknown. The Bangladesh military hunts him.

Today two of the professors, Dr. M. Anwar Hossain and Dr. Harun-ur-Rashid, were brought back to court to extend their interrogation (torture) period by another four days. Under the military’s watchful eye, the judge ordered them returned to custody for further interrogation. In court the two professors protested of torture, which the judge refused to enter into the record:

The two teachers of Dhaka University, detained in the wake of last week’s violent student protests, told a court on Thursday that they were taken to an unknown place after being picked up, kept there blindfolded and tortured and urged the court not sent them back to the ‘dark room’.

‘We were taken to an unknown place blindfolded, where we were tortured both mentally and physically by the law enforcers,’ Professor Harun-or-Rashid, dean of social sciences of Dhaka University, told the court.

‘The torture we have suffered is beyond description,’ he said adding that he could neither sleep nor take food in the four days on remand

Narrating the torture they allegedly faced on remand, Professor Anwar Hossain, dean of bio-sciences, told the court, ‘We were not at fault, but we have been torture mentally and physically in a dark room—the place where I was taken once before in 1976.’

‘We have also seen others arrested in connection with the university incidents being tortured there.’

He said, ‘We appeal to you [court] not to send us back to the dark room…It will be injustice if we are forced to go there again.’

Tonight they are back in the grip of the Bangladesh army.

Outside court today, the Bangladesh army got what it wanted from the two professors. They both apologized to the army.

"It’s an unwarranted incident. Today’s military is not the same as the Pakistani army in 1971. I’m sorry about the attitude shown to the army. Our army has a glorious history. They are symbols of sovereignty, security and unity. We understand it very easily that how they would feel and what their reactions would be if somebody attacks the army in uniform. We also feel dishonoured seeing the insult meted out to an army man in uniform. The attacks on the army meant attacks on the sovereignty of the country. I am deeply sorry for the attacks that made the army feel dishonoured and dented their self-respect. As the general secretary of DUTA and as a guardian of students, I apologise to all, from a respectable soldier to the army chief. There is no shame in seeking forgiveness. It brings glory. I think what I am saying will console the army in their grievances and sadness." [Emphasis added.]

"The attacks on the army in uniform are really unfortunate. I seek forgiveness from all in the army—from the army chief to the soldier on behalf of students." [Emphasis added.]

Torture made the professors "apologize" and seek "forgiveness". Torture exposed the Bangladesh military strongman, General Moeen U Ahmed, as a vindictive vengeful man, afraid of the unarmed citizens of Bangladesh.

It is all about the picture.

One hundred and fifty million people are now living under the force of arms. The Bangladesh military has created a climate of fear. It is now ruling by intimidation and by thuggery. Yet it has exposed itself to be fearful and weak. It fears the common man in sandals. It fears the boot – the same boot it uses to torture the citizens of Bangladesh. In all its might, it has managed to beat an "apology" out of two unarmed old men. That is weakness.

This entry was posted in Bangladesh, Human Rights, Torture. Bookmark the permalink.

11 Responses to Fear And Retribution In Bangladesh