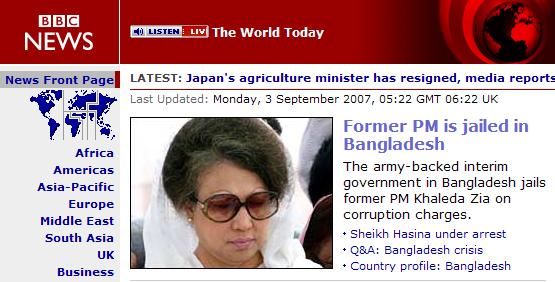 Khaleda Zia, the immediate past prime minister of Bangladesh, is about to be arrested. News reports suggest that a large contingent of police have showed up at her house and are preparing to take her away. Mrs. Zia has been under virtual house arrest for months now, so this move is not unexpected. Sheikh Hasina, another former Prime Minister, is already in jail and has been denied bail. This move comes on the heels of charges filed against Mrs. Zia late last night (Bangladesh time) accusing her of improperly influencing a government contract award in 2003. Also late last night, the government filed another case against Sheikh Hasina accusing her of receiving kickbacks to benefit a charity in her father’s name in return for influencing a government contract award in 1998.

In a telephone interview from her home as police surrounded her house, Khaleda Zia told BDNews24:

"I’m not afraid of arrest. People are with me. The case against me is false. Against the BNP, there was a conspiracy in the past. Still there is. I hope BNP leaders and workers stay united. I worked for people all my life. I’m passing the burden of justice to people as well. Please pray for me."

So now both former prime ministers, and leaders of the two biggest political parties in Bangladesh, are about to be jailed. The army is doing a bang-up job stamping out corruption. I have to wonder though if pursuing corruption cases without due process is itself corrupt.

She was arrested shortly after 7:30am along with Coco.

Police and RAB officers and intelligence agents swarmed the road to the Shaheed Mainul Road residence of the BNP chief.

Khaleda will be taken to the court of metropolitan magistrate Md Salehuddin. Security officers put in place a huge security arrangement on the road to the Chief Metropolitan Magistrate’s Court for Dhaka.

UPDATE (9/2/2007 10:41 PM): BDNews24 reporting that "security officials are battling chaos" in front of the court as Khaleda Zia is being led in. A friend of mine tells me that live TV feeds have stopped from the scene.

Security officers put in place a huge security arrangement on the road to the CMM’s Court, but a huge crowd seemed to have stretched it.

Still no information on what the "chaos" relates to.

UPDATE (9/3/2007 1:50 AM): Khaleda Zia has been denied bail and sent to jail. Her son has been taken into remand (interrogation) for 7 days. BBC News is carrying the story on its front page:

Ms Zia and her younger son, Arafat Rahman Coco, were led to court amid tight security after being arrested at her home at 0730 (0130 GMT).

Hundreds of police surrounded the court and thousands of Zia supporters gathered outside.

Security forces had surrounded the home since midnight (1800 GMT Sunday).

Ms Zia – leader of the Bangladesh Nationalist Party – is facing charges of corruption and abuse of power for allegedly using her influence to determine the operators of two state container depots in 2003, during her second term as prime minister.

Mr Coco is accused of pushing his mother to approve the deal. He is still being questioned by police and will remain in custody for seven days, lawyer Rafiqul Islam Miah said.

CNN is leading its world news section with the story from the Associated Press:

Police arrested former Prime Minister Khaleda Zia and one of her sons Monday on charges of corruption and misuse of power during her last term in office, news reports said.

The officials arrested Zia at her home in the Bangladeshi capital hours after a case was filed by an anti-corruption official against her and her son Arafat Rahman Coco, local television station Channel 1 and Channel I said.

Zia was led away from her home amid tight security to a court in another part of Dhaka, Channel I said.

Zia, who ended her five-year term in October, allegedly misused her power by awarding contracts to a local company, Global Agro Trade Company, when she was in office in 2003. Coco allegedly influenced his mother to approve the deal.

The complaint said Zia’s administration did not follow standard procedure in awarding the company work involving two cargo terminals, one in Dhaka’s Kamlapur Railway Station and another in the country’s main Chittagong seaport.

UPDATE (9/3/2007 5:45 PM): BBC News has a more detailed video report here. BBC also has some incisive commentary on the arrest and the future of Bangladesh:

There are worries that the anti-corruption drive may have become a weapon in the government’s reform plan, with which to get rid of troublesome leaders.

If this becomes evident, then public support for the anti-corruption drive itself could start to erode.

At the moment, the government retains enough credibility to pursue its agenda.

But many Bangladeshis are increasingly restless for the ban on political activities to be lifted.

As long the ban exists, the country’s politics remains in a limbo – unreformed, unbowed, but unable to re-assert itself, leading to more frustration and pent-up anger.

The same kind of frustration and anger that led to August’s violent protests.