Bangladesh Genocide Archives – On This Graveyard, We Shall Build Our Golden Bengal 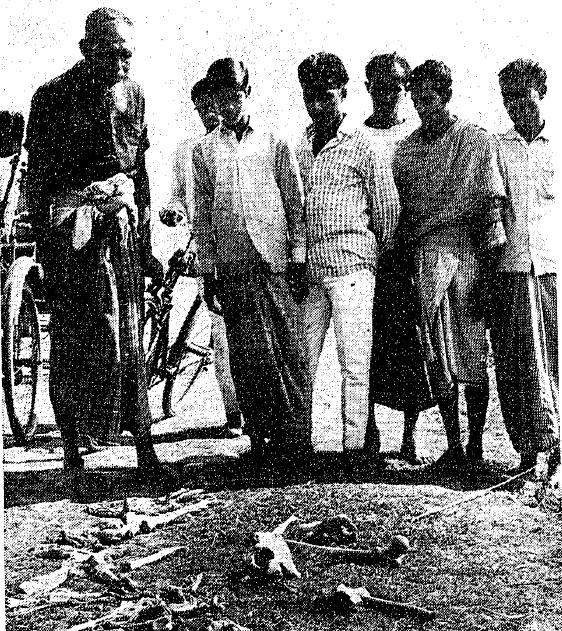 Sydney Schanberg of The New York Times reported extensively from Bangladesh during 1971 until he was expelled by the Pakistani military. We was a witness to the emerging genocide. He returned to Bangladesh after independence and reported on the horrors of the genocide perpetrated by the Pakistan army and their local collaborators.

The following is Mr. Schanberg’s report from Bangladesh published in The New York Times on January 24, 1972.

"On this graveyard, we shall build our golden Bengal." So reads a cardboard sign hung on a flagpole in the city of Khulna.

Not far from the flagpole, human bones, picked clean by vultures and dogs, still litter the roadside at various execution sites where the Pakistani Army and its collaborators killed Bengalis.

Bloodstained clothing and tufts of human hair cling to the brush on these killing grounds. Children too young to understand play grotesque games with the skulls and other bones.

This correspondent found, on a recent tour of the countryside, that almost every town in East Pakistan had one or more of these graveyards, where the Pakistanis killed hundreds of thousands of Bengalis, apparently on a daily basis, throughout their nine months of military occupation. The killing ended last month when the Pakistani forces, all from West Pakistan, were defeated by the Indian Army and Bengali guerrillas in a 14-day war.

Sheik Mujibur Rahman, the Bengali leader who was recently freed from Pakistani imprisonment and came to Dacca to become Prime Minister in the Government of Bangladesh, has estimated that the Pakistanis killed three million of his people. While foreign diplomats and other independent observers do not generally put the figure this high, all say it was at least several hundred thousand and many put it at more than one million.

Furthermore, these observers say that if one counts all the deaths that relate to the Pakistani repression – such as the deaths among the nearly 10 million refugees who fled to India and among the millions of others disrupted inside East Pakistan – Sheik Mujib’s estimate may well be accurate. The Bengali leader has ordered a house-to-house census to get a precise figure.

In Khulna, one of the Pakistani execution sites was a road on the edge of town that leads west to Satkhira. Though truckloads of skeletons have recently been carried away for proper burial, bones are still scattered along the gray roadside for over a mile. Both Bengalis and foreigners who live in Khulna say that at least 10,000 people were killed at this site alone.

The execution area was off limits to the public, but the Khulna radio station is less than 100 yards from the road, and Bengali employees at the station, who say they were kept working at gunpoint throughout the occupation, witnessed most of the killing either through the windows or from the front steps of the station.

"They killed some people every day," said Mokhlesur Rahman, a 26-year-old technician. "Sometimes five or six. Sometimes 20. On one day, they killed 500.

"On Sept. 3, they killed the most – 1,000 people. They fired with machine guns almost continuously for three hours. Then they threw many of the bodies into the river and they were carried out to sea."

Their voices were choked and their fists clenched as the radio station employees recalled the murders and told of victims begging for mercy and screaming in pain before they died.

One engineer said that sometimes the Pakistanis had put seven or eight Bengali prisoners in a tight queue and then, to save ammunition, fired one bullet through all of them. Sometimes, he said, they killed the Bengalis with bayonet charges.

Another engineer, Mazedul Haque, 26, vividly remembered the day the Pakistanis killed 500 people – July 25 – "by shooting and by cutting their throats with long knives and bayonets."

"First the soldiers came and told us to come out and watch," he said. "They said, ‘Come and see how we kill your people.’ They were sharpening their knives on the stones. It was their way of torturing us mentally."

"All those months," Mr. Haque went on, "thousands of vultures were flying overhead here. Now they are gone."

It almost seems, as one goes from place to place, that each story of the killings is more gruesome than the one before.

In Jessore, a 12-year-old boy, Habib Ramatullah, said he had seen Pakistani soldiers beat a man to death after hanging him upside down from a tree in front of the district courthouse. The boy said one of the judges had died of a heart attack as he watched.

All the evidence now indicates that the killings were on a wider scale and more sadistic than foreign newsmen and other independent observers had earlier thought.

According to confirmed reports, the Pakistani troops in nearly every sector kept Bengali women as sexual slaves, often making them remain naked continuously in their bunkers. After the Pakistanis surrendered on Dec. 16, the mutilated bodies of many of these women were found.

Other independent reports established that the Pakistanis also killed many, if not most, of the Indian soldiers they took prisoner. In these cases, too, bodies were mutilated.

Maj. Gen. M. S. Brar, commander of India’s Fourth Infantry Division, lost some his men this way at Kushtia. He says that at the time of the surrender, the opposing Pakistani commander, a Maj. Gen. Ansari, said he was unaware of the killing of any Indian prisoners. "I told him," General Brar declared, "’Either you lost complete control of your troops or you are a bloody liar.’" It seemed obvious that General Brar believed the latter.

A Baptist missionary from the Mymemsingh district, Ian Hawley, reported that the Pakistani troops, as they retreated before the Indian forces and the guerrilla fighters, killed their own wounded in a hospital there. Other missionaries in the same district say the Pakistani troops also killed several hundred razakars – the home-guard collaborators they had trained and armed – by locking them in a building, throwing kerosene on the building and then setting it on fire.

In a few areas, the local Pakistani commanders were apparently not in accord with the mass-killing policy and tried to keep down the amount of slaughter. In Faridpur, for example, residents say that the officer who was in charge of the district for the last two months of the occupation, Maj. Ata Mohammed, "was a comparatively good man."

But the officers who preceded him were evidently different.

At a Hindu temple on the outskirts of Faridpur, which the Pakistanis had half-destroyed with dynamite, almost the entire stone floor around the altar bears a dull red stain. The stain is from blood, for this was one of the places of execution.

In the weeks since the fighting ended, local Hindus and their Moslem friends have tried many times, without success, to scrub out the stain.

The minority Hindu community was a special target of the Moslem Pakistani Army.

"Many times during those months," said Jagodish Guha, a Hindu gas station manager who fled from Faridpur to hide in the interior, "my mind was disturbed. What was the answer? Only that they were animals. There were no religious trouble here. The Moslems and Hindus and Christians were brothers."

An old Moslem laborer was helping clean up the debris at the Hindu temple compound. Asked about relations between Hindus and Moslems in Faridpur, he said softly, "I watched the Hindu priests at this temple feed the poor of all faiths for 40 years. And then the Moslem soldiers came and killed them. How can they call themselves Moslems? This is why I am helping now."

The yellow "H’s" that the Pakistanis painted on the doors of Hindu homes and shops are still there, but the Hindus are slowly returning to Faridpur and other towns – the men first to survey the situation.

In every village and town, shuttered shops and houses and fields lying fallow are testimony to the number of people who were killed or fled and have not yet returned.

Many of the elite were murdered, some in the last few days before surrender, apparently as part of official Pakistani policy to try to decimate the Bengali leadership.

Every day, new mass graves are discovered. Every day, the newspapers run long lists of notices asking for information about missing persons.

In the capital, Dacca, many execution grounds have been found – particularly in sections like Mirpur and Mohammedpur, which are populated largely by non-Bengalis who collaborated with the Pakistanis.

One corner of the zoo in Mirpur is strewn with skeletons with hands tied behind backs. Many of the animals were also killed.

In the Sialbari neighborhood of Mirpur, skeletons seem to lie behind every bush and down every well. On the floor of a Bengali peasant’s ruined house stands a large pile of crushed bones – crushed, apparently, to prevent identification. A well 60 feet deep is filled to within two feet of the top with human bones.

Zabed Ali, a 35-year-old father of seven who fled Sialbari in the early days of the occupation, has come back to try to revive his small firewood business. His hut no longer exists, and he and his family are sleeping under a tree – but they have picked a tree some distance outside Sialbari. "It is too frightening to sleep there," Mr. Ali says.

A nine-year-old, Nazrul Islam, guided an American visitor to a field in Sialbari and said he thought his father was buried there, but did not know just where.

His family fled Sialbari when the army came, he said, but his father returned later to try to harvest their rice, and that was when the Pakistani soldiers shot him.

As dusk descended, the boy wandered through the field, pointing out clumps of bones with scraps of clothing and hair clinging to them. His eyes grew larger and his behavior was nervous and odd as he seemed to look for his father.

"Dig anywhere here," he whispered, "you will find more bodies."

8 Responses to Bangladesh Genocide Archives – On This Graveyard, We Shall Build Our Golden Bengal