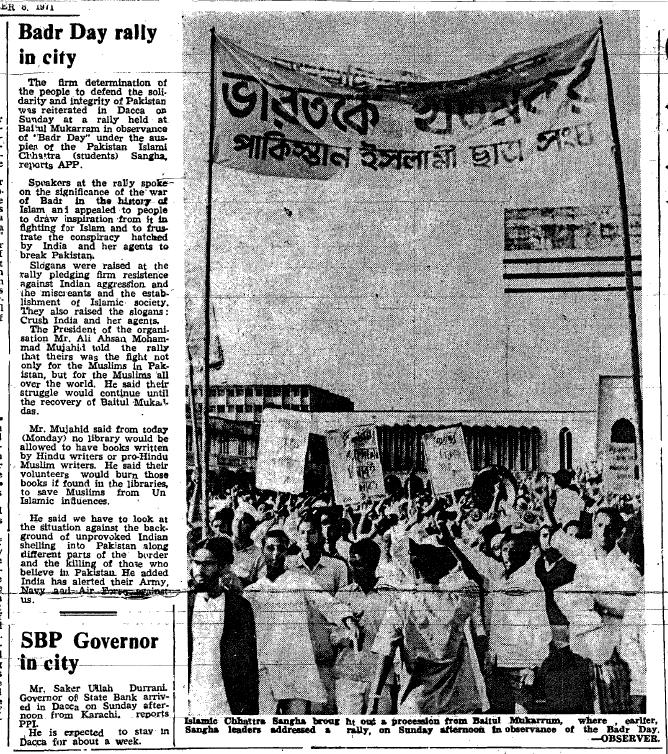 In October of this year, Ali Ahsan Mohammad Mujahid, Secretary General of the Jamaat-e-Islami party in Bangladesh, declared that his party did not work against the independence of Bangladesh in 1971. He went on to say that "in fact anti-liberation forces never even existed."

Today, on the eve of the 36th anniversary of the liberation of Bangladesh, Mr. Mujahid declared "Bangladesh is ours. We will run this country." He then added, "all irrespective of caste and creed have to be tolerant. Others have to take a vow to protect independence and sovereignty of the country." [Emphasis added by me.]

However, I don’t understand how he can forget his own role. In 1971 Mr. Mujahid was the President of Pakistan Islami Chhattra (Student) Sangha and leader of the al-Badr in Dhaka city. It is difficult to understand how he could have forgotten his very public role leading forces against the liberation of Bangladesh.

The firm determination of the people to defend the solidarity and integrity of Pakistan was reiterated in Dacca on Sunday at a rally held at Baitul Mukarram in observance of "Badr Day" under the auspices of the Pakistan Islami Chhattra (students) Sangha, reports APP.

Speakers at the rally spoke on the significance of the war of Badr in the history of Islam and appealed to people to draw inspiration from it in fighting for Islam and to frustrate the conspiracy hatched by India and her agents to break Pakistan.

Slogans were raised at the rally pledging firm resistance against Indian aggression and the miscreants and the establishment of Islamic society. They also raised the slogans: Crush India and her agents.

The President of the organization Mr. Ali Ahsan Mohammad Mujahid told the rally that theirs was a fight not only for the Muslims in Pakistan, but for the Muslims all over the world. He said their struggle would continue until the recovery of Baitul Mukaddas.

Mr. Mujahid said from today (Monday) no library would be allowed to have books written by Hindu writers or pro-Hindu Muslim writers. He said their volunteers would burn those books if found in the libraries, to save Muslims from Un-Islamic influences.

He said we have to look at the situation against the background of unprovoked Indian shelling into Pakistan along different parts of the border and the killing of those who believe in Pakistan. He added India has alerted their Army, Navy and Air Force against us.

This entry was posted in Bangladesh, Bangladesh Liberation War, Terrorism. Bookmark the permalink.