President Bush Strikes From Behind

At the G-8 summit, President Bush grabs German Chancellor Angela Merkel from behind and gives her a quick massage before rushing off. Chancellor Merkel is not amused.

While the Middle East burns, our fearless leader is busy with his frat boy pranks. Click here for the video. (A major hat tip to my German friend.)

UPDATED VIDEO AND COVERAGE: CNN has posted a longer, and clearer, video here. (The story is here). In the video, President Bush appears to suddenly speed up, veer right, and go in for the blitz-massage. ABC News also has a story on the incident here. Various local ABC and NBC TV affiliates are also carrying the story. Countdown with Keith Olbermann covers the story on tonight’s show (7/21/2006). 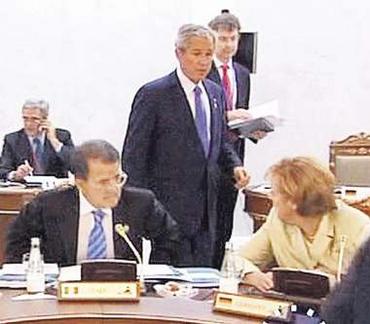 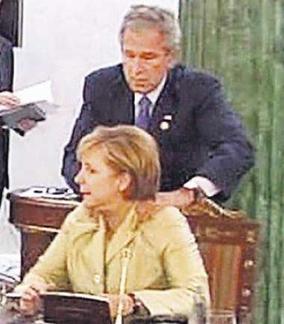 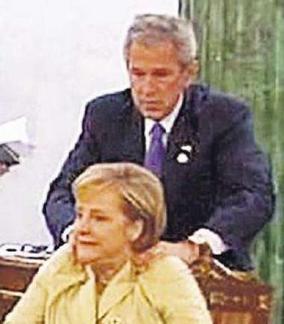 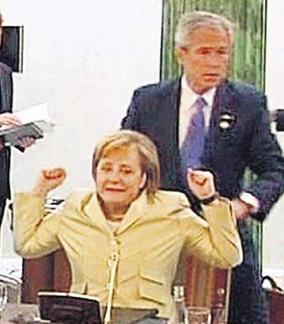 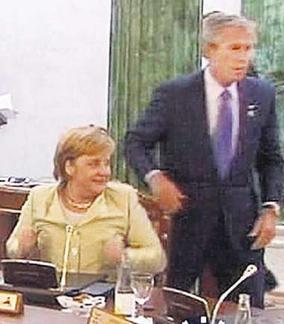 UPDATE: The LA Times reports on the incident in this article. But according to the LA Times, Chancellor Merkel "smiled". I don’t know about you, but it does not look to me like she is smiling. (Hat tip to NegSpin from Daily Kos for providing the LA Times link in a comment from my cross post there.)

UPDATE III: Will Femia of MSNBC’s Clicked has picked up on this story. He has analyzed the video and concluded that it was tantamount to a harmless hair tussle (you know, the kind girlfriends give each other! sheesh!):

I clicked a few links worked up about the President groping or feeling up the German chancellor.  The still photo does give that impression, but watching the clip on Crooks and Liars, I don’t think I agree.  It looks more like he gives her the equivalent of a hair tussle as he walks by.  Her reaction doesn’t look like she’s being violated so much as making a somewhat awkward gesture to get him back.

But he can be forgiven for the hair tussle analysis. He does such stellar work when discussing important conflicts in the world too. Check out this bit of informed journalism from the same post:

Speaking of military equipment, "To  appreciate the thorny, complex, multi-layered difficulties Israel confronts –from house to house battles to the highest levels of international diplomacy– one needs to understand the rather simple Katyusha rocket Hezbollah shoots at Haifa and other Israeli cities."  It’s so weird that with each armed conflict we learn about new missiles.  Remember the scud? [Emphasis added by me.]

I haven’t the heart to remind the hair tussle genius that Katyusha rockets have been around since World War II and Hezbollah’s been using them for a long long time. Katyushas may of course be new to Will but I think the rest of the world probably is a little better informed. Weird indeed! Sometimes facts never get in the way of the story.

UPDATE IV: The Blitz-Massage is creeping into mainstream media like a virus. MSNBC covers the power of YouTube in spreading the video. As usual, the blogs get cursory mention. My recollection is that this story was and is being driven by the blogs.  I should know – the hits that nearly took my blog down came from the high traffic blogs who really gave the story life. Almost every blog I know is linking to Crooks & Liars for the video, if not the original Bild video.

The article does contain an interesting quote from Professor Larry Sabato:

Larry Sabato, professor of politics at the University of Virginia, agrees that today, public figures have to be more careful in “a thousand ways.” But he maintains sites like YouTube can be revealing.

“If they’re not doing something that’s embarrassing, they have nothing to worry about,” he says. “A president ought to know enough not use an expletive in a fairly open meeting, and almost any male alive today knows that you don’t offer uninvited massages to any female, much less the chancellor of Germany.”

I think I will have to agree with Professor Sabato on this one.

It’s interesting that, much like the Stephen Colbert WH Correspondence Dinner story, this story is being covered by the MSM not directly but rather as a story on the reaction of the blogs, YouTube, etc. to a Presidential embarrassment. I think this is what they call plausible deniability.

This entry was posted in Foreign Policy, Humor. Bookmark the permalink.

97 Responses to President Bush Strikes From Behind